Stranger Danger: How One Child Recently Eluded a Potential Disaster

I read this article in today’s Seattle Times about 10- year old Isabel Carpenter’s run-in with a “man in a white van” and immediately felt that all-too familiar panicky feeling: this could happen to my child.

Isabel was walking home from school (usually she is driven by her friend’s mother, but her friend was sick that day) – all of four blocks – when she was approached by a stranger who said to her, “Hey, I got something for you!” She immediately ran to the nearest house, rapped on the door — and here is the saddest part of the whole story — the resident ignored her pleas for help. The man drove away and she ran safely the rest of the way home.

How can anyone be afraid of a little girl screaming, “I need to call my mom!”? Ok, without having all the background information, I know it was an old man who probably couldn’t even hear what she was saying, but still… isn’t the terrified expression on her face enough? 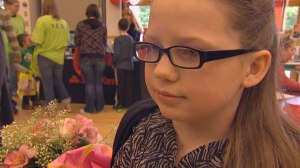 Anyway, I am so thankful I saw this article, because it is a timely reminder that I am way overdue for one of those “important big conversations” that you have with your kids about life in general. We have regular conversations about character development- things like, why we shouldn’t hit our younger brother even though he is so annoying, or why this kid or that kid said something that was rude or just plain mean. But every once in a while we have the “big” conversation, about stuff like the birds and the bees or death (ie. the recent loss of our cat).

I know I have had conversations, years ago, about “stranger danger” with my oldest, who is now 10, but as she strains for more independence, it would be timely to have another. And I don’t think I have yet had the talk with my youngest, who is 7. I don’t want to frighten them and I feel sad that in this day and age we have to be so wary of others. Well, we don’t have to, but we do have to be cautious. Nothing is for certain anymore.

So, my two kids are quite different in personalities. The older one is more introverted and keeps to herself. She is not a risk-taker, is more cautious, and makes good decisions. The younger is very outgoing and loves to chat it up with anyone in sight. Remember those studies about delayed gratification? Kids who waited to eat a marshmallow had better positive life outcomes. He’s one of those kids who won’t wait. But maybe I underestimate him! (Apparently, there’s new research showing that environment plays a role, as opposed to innate abilities.)

After I read the article, I told him to come over and sit by me while he had his ice cream. Nothing like a little sugar to loosen the tongue and lighten the mood.

“If someone came up to you and said, ‘Hey, I have something to show you in my car,’ what would you do?” I began, innocuously enough.

My son smiled at me, thought, hemmed and hawed, and finally came up with: “I would say, no thank you.”

“And what would you do next?”

“I would wait for an answer. They might have something else they want to say to me. I can’t just walk off!” (and at this point, I’m thinking to myself, knowing full well how curious and respectful he would be in this situation, ” heck, yes, walk away!!”)

As we chatted, it was clear that he would be cautious, but he would want to keep the conversation going. In fact, when I asked, “What if you were at the park and you saw somebody doing something they weren’t supposed to be doing- like, they obviously didn’t belong there?” he responded with, “I would go up to them and tell them they weren’t supposed to be doing that!”

I have my work cut out for me: I must arm my kids with the tools they need to be confident, brave, generous, compassionate, and strong members of our community. And I need to teach them to trust their gut feelings and that no matter what, if they walk away, it is ok.

4 Responses to Stranger Danger: How One Child Recently Eluded a Potential Disaster