There’s a reason I haven’t been posting as much as I’d like.

I decided in the prime of my mid-life to get implanted (I wince as I say this because it sounds so…robotic?).

No, I did not get breast implants.

I got something even better: a state-of-the-art cochlear implant from MED-EL.

(Note: It’s too much trouble to start a different blog about this journey.  Who knows, maybe hearing just a little better will make me a more focused philanthropist? Or maybe I will more easily be able to pick up newsworthy tidbits about the world of philanthropy.)

What exactly can I hear?

The last 3-5 years have seen a bit of a drop in my hearing- about 5 decibels (which is the measure of loudness of sound) in each ear, which doesn’t sound like much, but when you already have a 95-100 db loss in both ears, anything extra is noticeable.

Let me show you what I mean. Here is a picture of an audiogram, which shows the sounds that a person with intact hearing can hear at different frequencies (pitches) and decibels (loudness): 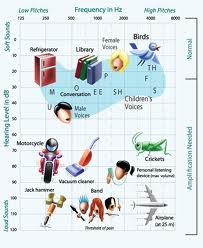 So here is the audiogram of the last hearing test I had, which was a couple years ago: 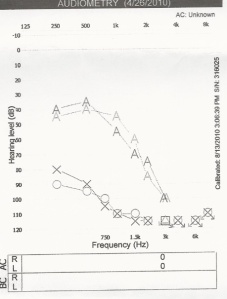 As you can see, the top line with the A symbol (aided with hearing aids) is how much sound my hearing aid gives me currently- and that is about 50-60 decibels and not much more than 500 hertz. This is not enough for me to hear many speech sounds, as you can see from the first picture, many of which lie in the 10-30 db and 1000+ hz range.

The X/O symbols show how much I can hear without hearing aids in each ear (X is left ear and O is right ear) .

Well, let me tell you, this is pretty bad hearing! Total deafness would be something like 110/115 decibels in each ear and hearing aids would pretty much be useless in that case.

Now, with a cochlear implant, it is possible to have a straight line across all the frequencies, at 20-30 decibels, which would mean that one could pick up all the important speech sounds. And that would be cool, because that would make understanding words a lot easier. You can find out more about what a cochlear implant is and how it works here.

But this will require a lot of training to re-learn a brand new sound and recognize what it stands for. Cochlear implants do not restore hearing! I may never achieve what my kids can do, for example, to overhear and talk on the phone. And that is ok, because my main goal is to help make lipreading easier all around, particularly in noisy situations and in large groups.

How I decided I was ready.

Someone asked me, “Why didn’t you get the implant ten years ago?”

I simply wasn’t ready. I was a busy mom, working, and didn’t have the time or luxury of thinking about myself, was my reply.

I’ve considered it fleetingly, on and off over the years. But nothing made me desire it. Even when one by one, my friends started getting one implant, then two. Even when my husband and two kids got one, then two (my son was the only one who got two at the same time). Even when my mother, who always wanted me to hear better, prodded me from time to time.

I had just never thought it would help me enough. I’d been doing “fine” all along.

I think my journey to really considering the implant began when I gradually started realizing I couldn’t hear the kids calling my name from the back of the car while I was driving. “Mommy!” they would scream and I’d be oblivious. Then my daughter started losing patience with me when I didn’t respond as quickly as she would have liked and even as “correctly” as she wanted. I started to get more and more tired by evening time, especially if I had been out in a noisy environment, like a restaurant, where it is a lot harder to make out words.

And I was starting not to like this series of events impinging on my lifestyle.

Then a friend told me she was getting an implant and for what seemed like the umpteenth time over the last few years, I started thinking about it again.

Checking it all out.

Impulsively, I made an appointment at the University of Washington to get assessed, which meant I’d get a CAT scan to check the anatomy of my ears (all was fine), get a hearing test, and talk with the surgeon. You have to do all this in order to get insurance approval (and get this: the whole shebang, including the assessment, surgery, and getting the implant equipment, is about $100k. Thank G-d insurance covers most of that).

I didn’t even bother shopping around for the surgeon I wanted: he operated on my husband and had inserted his second implant, I had met him several times, and he seemed pretty competent: “I’ve done between 500-1000 surgeries, as young as a 7-month old and as old as a 96-year old,” he told me. And because I am Jewish, it probably helped that he was also Jewish, which meant he was a perfectionist, which is exactly what I would want in someone who is gonna cut me open.

So I’m at the University of Washington and the audiologist, Nancy, puts me in this little soundproof booth, where I’m supposed to listen for sounds or words and either press a button if I heard something or repeat the words back. I’m very familiar with this booth. It’s about 5′ x 5′ x 7′- it’s not as small or claustrophobic as you might think. As a child, I had hearing tests once a year in a booth like this (my audiologist’s name was Elmo Knight- I wonder if he is still alive). It was just something I did routinely and my hearing stayed stable until I reached my 40’s.

So this time, though, I literally could not hear much of a n y t h i n g. Sure, I heard a few low-frequency beeps but that was it. And I could only make out a few vowels in some words and it dawned on me that I could no longer distinguish between the vowels. And forget those consonants– their frequencies are too high (see audiogram pictures above). And I could not understand a single word of the sentences that were spoken via a recording.

As a high schooler, I remember listening to the radio in the car and recognizing when Billy Joel was singing- that gave me a thrill. No longer can I do that. Musicals, which I adore, have become a cacophony of sounds, with words and music all mixed together instead of being distinct from each other.

After we were done testing each ear, then both ears together, Nancy, the audiologist, came in the booth and said, with a smile on her face, “I think you qualify for a cochlear implant!” Which was such a joke, because everyone already knew I was qualified- we were just going through the process of documenting the proof.

So I went home and thought, “Oh, I’ll just think about this over the summer and maybe I’ll get it done in the fall.”

Then a crazy idea started forming: my parents were coming to town in a few weeks. Maybe I could get it done while they were here and then my mom can just take care of me! And then I thought, “Nah, that’s just too short notice, and besides, they probably don’t have an opening.” Surgery was usually done on Mondays, so the only Monday that would work while they were here was June 17.

I emailed Jenny, the gal who keeps track of everything- insurance paperwork, appointments, etc. “Hey Jenny, I’m just curious — and I’m just thinking — I haven’t decided anything, but is there an opening on Monday June 17?”

The reply came back so fast: “Yes, that date works! Let me know asap so I can get the preauthorization for insurance approval ready.”

And you know, I just took it. I grabbed that appointment so fast before anyone could say, “Uncle!” And the amazing thing is, when I went for my pre-op appointments the following week, it had only taken one week for the insurance company to approve the surgery!

Stay tuned for Part 2: my pre-op appointments and my surgery!

10 Responses to The 40-Something Implantee- Part 1