I haven’t really heard in three days, since I have been activated. That means I have been relying entirely on lipreading this whole time. Which further means I am exhausted and therefore, irritable. Can’t blame mid-life hormones on this one.

So, this past Wednesday, Ed, my husband, and I went for my 9 a.m. appointment with Nancy, the audiologist. Marybeth, the audiologist from Med-el who covers the NW region, was there as well, which was nice because that meant she could help Nancy troubleshoot the programming.

The first thing Nancy did was check the internal device. She put a coil/magnet on my head– this was attached to a wire which was plugged into to the computer. That was the first time I felt the sensation of a magnet on my head. It went on very smoothly, and it was a little cold at first, but I can’t really describe the sensation- except for “weird”. After a while, I forgot it was there.

So I just sat there while she typed on the computer, weaved some magic, and said that everything looked great. Basically, she went through each electrode (the Med-el electrode array has 12), and made sure it was functional. “There’s nothing broken in there,” she said with a smile. Well, that’s good.

Now it was time to turn on each electrode! Nancy took the testing magnet off of me and put on the fancy Rondo, the new Med-el product that has an all-in-one magnet and processor! It felt fine, but after a while my head started to feel a little tender– I am still healing in that area (I later switched to the regular behind the ear processor). 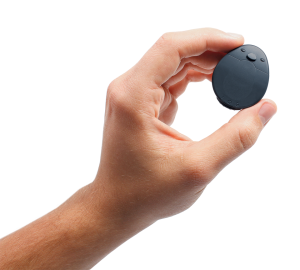 She put a sheet in front of me, which is going to become very valuable in my relationship with her: it is a way for me to communicate to her how soft or loud the sensation or sound is.

So I am waiting for something to happen and Nancy keeps looking at me, and I’m thinking, what, do I have a booger hanging out or something?

Then I feel it. It is almost impossible to describe. It was coming from the center of my head and it felt like some kind of bell was ringing.

“Is this it?” I ask. Nancy smiles and nods. She can tell something is happening.

It was very imperceptible at first, but then Nancy increased the volume and I started pointing to the sheet to where I felt I could perceive the sensation’s loudness. To me, it did not feel like a sound, not the sound I am used to, but rather, a feeling. Very strange. I was quite bewildered by it all. And later on, I would think to myself, “If this is what it’s going to be like, I am screwed.” But then I remember that many of my friends who have received implants thought this very same thing and then later say this was the best thing they ever did and they would never go back to using hearing aids.

Anyway, Nancy went through all 12 electrodes, turning them on and playing with the volume for each one.

Then she turned on the microphone on my processor, which meant that every single electrode was on at the same time! You would think it would be a blast of something horrendous, but it wasn’t really. Everyone in the room started talking to me. My head suddenly went sort of ring ring ring over and over again. Not the most pleasant of feelings. She tapped with her pencil on the desk but it was too soft for me to pick up anything. Basically, everything that made a sound, whether it be a voice, tapping, car, piano, etc. all gave me the same sensation. I could not distinguish between all those and even now, on Saturday, still can’t. However, I can tell that something is making a sound when my head goes “wheeee”- I just can’t make out the source of that sound.

Then Nancy went back through each electrode to make everything louder. Her goal was to get me to point to between 4 and 5 on the sheet  (comfortable but not too soft and comfortable but soft) for each electrode, because she did not want to overwhelm me at this first programming.

Then she turned the microphone on again and I could definitely “hear” or “feel” a little more. I excused myself to go to the bathroom and when I walked in the hallway, I could tell there was more sound out there. And after I flushed the toilet, my head went “wheeeee” with the sound of the flush.

Two hours later, after all this testing and programming, Nancy had made four programs for me, each one a bit louder than the other and told me to keep it at a manageable level and not to push myself. I started with the softest program when I walked out of there on Wednesday. Today, Saturday, I am on the fourth program, having maxed out on the other three (they are too soft now).

I was pretty wiped out and still am, from all this stimulation (I am only wearing my implant and not my hearing aid in the other ear) and trying to understand what everyone is saying. A few cool things:

My next appointment is this coming Wednesday. I have an appointment every week for the next month or so, then I think I will go a month between appointments.

Right now I am looking for auditory-verbal therapists to help me with listening exercises and practice and hope to line up friends to do some listening with me regularly.

This entry was posted in Personal stories and tagged activation, cochlear implant, MED-EL. Bookmark the permalink.

7 Responses to The 40-Something Implantee: Part 3